The Yangtze River is Zhenjiang’s lifeline and a constant threat. To prepare for floods, local authorities made one really big drone map.

Zhenjiang is one of China’s busiest ports. Over 140 million tonnes of cargo passed through the inland river port in 2013 alone. Because of its proximity to both the Yangtze River and the Grand Canal, Zhenjiang has been an important transportation hub for centuries.

But the waterways which bring so much prosperity to the prefecture occasionally overflow.

To better understand the risks of flooding, strengthen and maintain the ecology of the riverbank, and understand the way the riverbank is being developed and used, the People’s Municipal Government of Zhenjiang commissioned a high resolution orthophoto. More than 400 square kilometers were mapped using MMC drone and Pix4Dmapper.

The Zhenjiang Municipal Flood Control Bureau is a short walk from the Yangtze River. In July 2019, staff could clearly see the river from the office: not from the windows, but in a massive orthophoto created from 21,000 images, representing 400 square kilometers.

Take a closer look: high resolution orthophotos allow authorities to examine the area in detail
Before the Yangtze River project, the region’s flood planning maps, water conservation data and related information were stored as seperate, discrete files. For such a big project, the team needed to bring them all together with a custom base map.

The Municipal Flood Control Bureau had a clear brief: to produce high-resolution orthophotos of the 100km of Yangtze River coastline, and 500 meters either side. The project area stretched from Dadao river in Jurong City in the west to Xilaiqiao Town in Yangzhong City, including a few islands in the river.

The 400 square kilometer area was to be mapped with a ground sampling distance of just 8cm.

While large-scale drone mapping has been achieved before, it’s a big challenge for any team. With the Griflion M8 drone, the Municipal Flood Control Bureau believed they had the right tool for the job.

Preflight checks of the VTOL (vertical take off and landing) drone

The team chose a MMC Griflion M8 drone, equipped with a high-res camera and an RTK/PPK system for accurate mapping.

RTK/PPK is remarkably accurate,  but for such a large and important project, the team wanted to confirm the accuracy of their results, and a way to illustrate the success of the project.

Team members survey a point with a GNSS receiver

Putting the plan into action

In the early morning, the drone hummed to life. Its orange wings stretched for two and a half meters, standing out against the sky.

Before takeoff, the pilot uploaded the pre-planned route to the drone. To ensure an accurate reconstruction, and to achieve the required 8cm GSD, the team set a 75% frontal and 70% side overlap.

The team tracked the drone as it completed the first of the 41 flights required for the project. An hour after launch, the Griflion returned safely: as well as ensuring accuracy, its RTK base station helped it find its way home.

After a quick inspection, the pilot packed the drone into the car, and drove to the next launch point. Over the coming days, the process was repeated another 40 times.

The drone flights were spread over 15 days, but back at the office, staff didn’t wait for flights to be completed before starting work.

Team members imported the data into Pix4Dmapper and checked the image overlap. Pix4Dmapper’s Fast Processing option allowed the team to review even large datasets quickly and the Quality Report confirmed the results were reliable. With a large-scale longer-term project, weather was something of an issue. As the light changed from one day to the next, so did the luminosity of the images, causing banding across the merged outputs.

“Sometimes the weather was clear one second, and stormy the next,” continues Mrs Pan. “In this part of China, category six or seven winds are not uncommon. However, despite the bad weather and other challenges, we were very happy with the results.”

After 15 days of flying, the MMC team had covered 400 square kilometers, and captured more than 21,000 high-quality drone images, with a resolution of 42 million pixels. Once the team checked the fast-processed data, it was re-processed at a higher level.

In an informal survey, most of our users agreed that a ‘big’ project is over 10,000 images.

The Yangtze River project consisted of over 21,000 images at 42-megapixels each.

However, despite the size of the project, processing in Pix4Dmapper was straightforward.

Thanks to the RTK/PPK and ground control points, the team were able to use a standard workflow. “The classic ‘three-step workflow’ gives most of the work to the computer!” adds Mrs Pan. Images were stitched into a continuous, undistorted and measurable image: an orthophoto.

The team achieved great results with standard settings and found that while Pix4Dmapper took some time to process such a large dataset, it needed only minimal human intervention.

The team leaned on the rayCloud to mark ground control points. After manually marking a couple of tie points, the software takes over and automatically marks the rest of the points. While a little manual fine-tuning may be needed, the team reported the feature is “very convenient and practical!”

The results were checked in the Quality Report to ensure they mapped to the project requirements.

Why use drones for large scale mapping?

Drones may seem an unusual choice for a project of this size. But light aircraft are prohibitively expensive to fly and logistically difficult. Satellite imagery may seem like the answer, but it just doesn’t have the resolution needed. 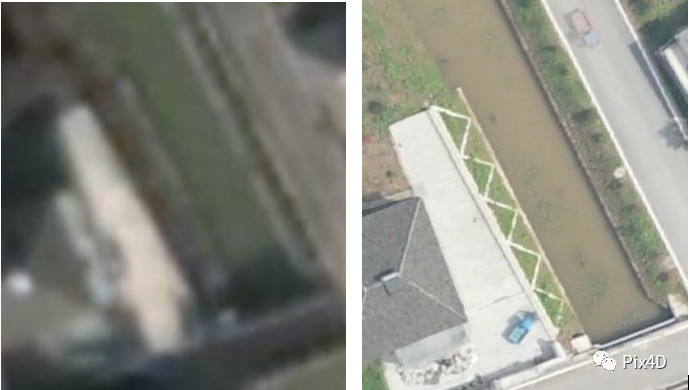 When comparing a satellite image (left) to the orthophoto (right), the difference is clear

While our skies are filled with satellites, the available images are not always up to date. One clear example is a basketball court, which was not completed when the satellite images were captured, but is easy to spot in the orthophoto. 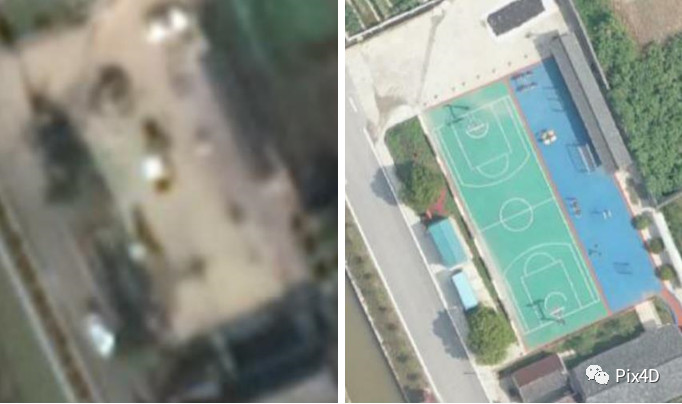 Orthophotos have another advantage over stitched satellite images: accuracy. Except in the rare areas where the terrain is perfectly flat, stitching images introduces artifacts where photos are misaligned. Rectified orthophotos take into account the height of the terrain through the DSM (digital surface model) to account for this. Orthophotos produced with drone imagery are more accurate.

The team were more than satisfied with the orthophotos natural looking colors and the good overlap meant there were very few gaps.

Water is very difficult to reconstruct as an orthomosaic. A few ‘cracks’ appeared in the river, but the team was able to plug the holes with the surface tool in the rayCloud, greatly improving the appearance of the finished model. 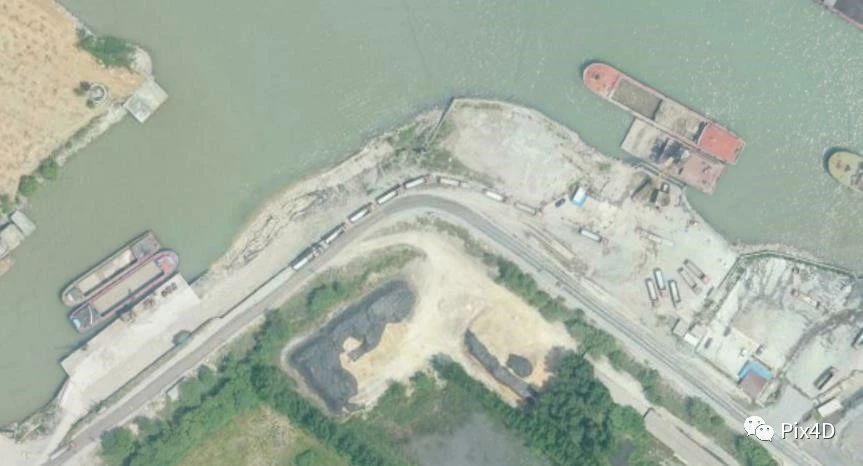 The final result was delivered just one month after the first drone flight.

“For data annotation, the accuracy and resolution of these orthophotos far exceeds our needs,” the head of the Municipal Flood Control Bureau commented. “Pix4D is not only powerful, but also easy to operate, fast to get started, and does not require much professional knowledge.”

He continued: “We usually use small drones to photograph small rivers and lakes, our own work. Personnel can perform data processing to produce high-precision orthophotos. This project using Pix4D to process hundreds of square kilometers of data has been successful, adding to our confidence in the processing capacity of large areas.”

The results are in, but the project is continuing. The Zhenjiang City Municipal Flood Control Bureau plans to regularly update the Yangtze River orthophoto and extend the technology to more rivers and lakes in Zhenjiang. With this project as an exemplar, the team hopes that more cities will begin similar drone programs. As well as improving the area’s resilience to floods, it may mean that eventually all 6,300 kilometers of the Yangtze River is mapped.